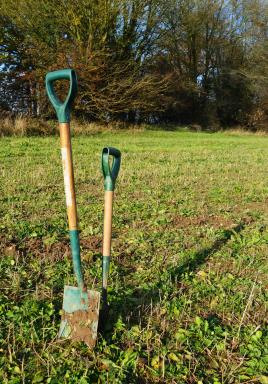 On a chilly Thursday morning a few weeks ago, the Rural Energy marketing team had a rather early start… We were off to put our best Wellington-wearing feet forward in the name of carbon cutting for a day out in the countryside.

We joined one of our print suppliers, Soar Valley Press, at their offices to car-share the journey down to the beautiful Heartland Forest in St Albans to plant lots of tiny trees.

This was an organised ‘Carbon Capture’ event held by the Woodland Trust, to which we were kindly invited by one of Soar Valley Press’s main suppliers; the Premier Paper Group.

Set up in conjunction with the Forestry Commission, the Woodland Carbon ‘Carbon Capture’ programme lets businesses give back to the community by planting, in total, thousands of trees in the British countryside and encouraging buyers to use only sustainably-sourced paper for their printing needs.

Not only can a company off-set some of their carbon footprint through getting involved in such schemes, it also helps to increase the dwindling number of native species in the UK, such as oak, maple and birch.

As a business, tree planting isn’t the only way the Carbon Capture programme works. You can also opt in to capture the carbon from the manufacture and distribution of the paper used when ordering your next batch of leaflets, brochures, posters and flyers. This sees the calculation of the average amount of CO₂ generated in producing your order and including a small charge on the final bill, itemised on the invoice. This is done by using trees directly from responsibly farmed and managed woodlands of the Woodland Trust rather than recycled paper or supplied from unsustainable forests.

Using paper from sources involved in carbon capture is actually seen as more environmentally responsible than using recycled materials. Recycled paper is great, but it has to go through a lengthy process that includes transporting and bleaching of materials that makes it less ‘green’ than people might think. Capturing the carbon and paying those charges ensure new trees are planted, growing our natural forests and woodlands in the UK for future generations to benefit from, something Rural Energy and our suppliers strongly support. As a company, we did our own tree planting in Leicestershire at the end of 2013, a piece of woodland that will we hope to see thriving over the coming years.

The tree planting event, in a field opposite Heartlands Forest, was busy with eager planters, including a group of school children learning about the environment and individuals wanting to do their bit to cut their own carbon footprints.

Being presented with a woolly hat to keep warm and gloves to stay clean at the start of the planting was a lovely gesture by Woodland Carbon and certainly kept us enthused. Well, that and the steady supply of chocolates!

3,000 trees were planted by the end of the morning, with everyone feeling very deserving of the hot drinks, soup and pasties made available in the refreshments marquee.

Following lunch, and goodie bag distribution which included a tree for everyone who took part to plant themselves, there was a tour of Heartlands Forest with talks about carbon capture, woodland management and ethical paper sourcing.

Backs were aching, hands were calloused and ears were red, but we all left with a sense of achievement.

Well done to the Woodland Trust and everyone else involved in this initiative.